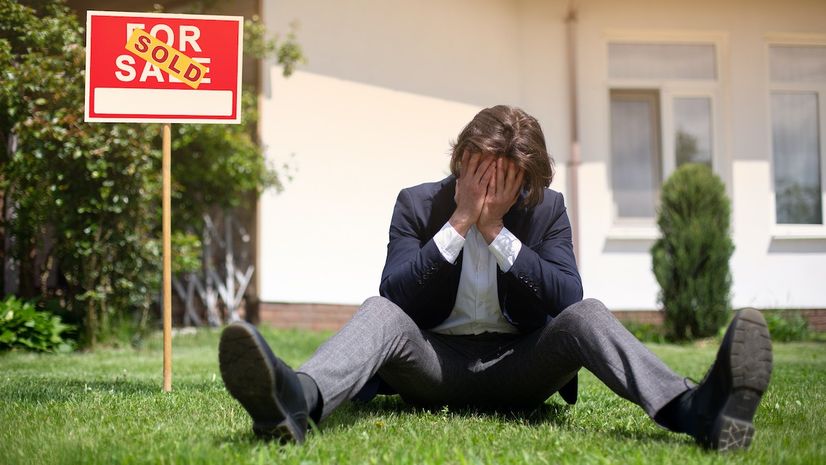 Ron and Kathy Kern began looking in earnest for their forever home this past spring when their youngest child finished college. The couple hoped to trade their two-story, four-bedroom house in the Indianapolis suburbs for a smaller, one-floor ranch where they could more comfortably age in place.

Unfortunately, it didn’t work out the way they had hoped.

The Kerns put in four offers, withdrawing the last one and losing their escrow in the process when they learned how much the home’s needed renovations would cost. After the demoralizing experience, they decided to suspend their search until Ron, 61, retires from his job at an engineering firm sometime down the line.

“We’ve never experienced a market like this before. … It’s a roller coaster we’re ready to get off of for a while. This last offer just did us in,” says Kathy, 58, a recently retired ATM specialist at a credit union. The empty nesters, who live in Fishers, IN, are having trouble sleeping and losing weight as a result of the stress. “When you do find that house where you don’t have to remodel anything, that’s the house that everyone else is looking for.”

After contending with more than a year of record-high and fast-rising home prices, ruthless bidding wars, offers that are all cash and 10% to 20% over the asking price, and a historic shortage of properties for sale, many shoppers in today’s pandemic-fueled housing market are suffering from buyer fatigue.

Some are burned out and taking a break, or leaving the market entirely. Others fear another housing bubble is on the horizon (even though real estate experts believe that’s not likely) so are sitting this one out. And there are those who were priced out as home prices rose higher than their budgets.

“The ultimate sign of buyer fatigue is putting a search on pause,” says Realtor.com® Chief Economist Danielle Hale. “I can understand how in today’s tough market some buyers may not be willing to keep searching.

“There is a real grief that happens if you bid for a house and don’t get it. Mentally a part of you was already committed to the home,” she says.

Only about a third of recent homebuyers had their first offer on a property accepted, according to a Realtor.com survey from January of recent and prospective first-time buyers.

The situation was bleaker for first-time buyers, many of whom struggle to come up with the down payment. Roughly 68% of first-time buyers fell in love with a home, but ended up not being able to buy it, due to being outbid or not securing financing, or the house failing inspection, according to the survey.

The COVID-19 pandemic and all the safety concerns that come along with it have exacerbated the situation. Some potential sellers have become more hesitant to list their properties, worsening the housing shortage. Meanwhile, desperate buyers who can work remotely for part of—if not the entire—week are moving farther outside of big cities and into smaller urban areas, boosting prices and competition across the country.

“It’s likely to continue to be competitive for the foreseeable future unless something drastic changes and we see a lot more homes for sale,” says Hale. But “even if some buyers bow out, there are still plenty of buyers in the market.”

Many local and first-time buyers are being priced out.

The work-from-home (aka anywhere) phenomenon has pushed prices up to unheard of heights in many parts of the country where they had previously been more reasonable. But many white-collar workers who no longer need to go to an office in the big, pricey cities on the coasts have been able to sell their expensive homes and use that cash to purchase homes in vacation areas as well as the farther-out suburbs and smaller cities. That’s made it harder for locals to compete.

“It’s pretty bad in our market for first-time buyers,” says Barbara Jordan, a real estate agent at Coldwell Banker Realty in Tampa, FL. Many of the buyers who are winning the bidding wars are from the Northeast, Chicago, and California who are selling their homes and moving to Florida. “What we’re seeing is up to 20, 30 offers on a house. The ones who win are the cash buyers or have money they can throw on top.”

The first-time buyers—most of whom are college-educated, with good jobs and often 20% down payments—sometimes just can’t compete, she says. That’s because it’s harder to get offers accepted with a mortgage. Sellers want to know they’ll get the prices offered to them even if their property doesn’t appraise for as much.

“It’s so sad—they’re good people who have done everything right,” says Jordan of these buyers. “But a lot of them are pulling back from the market.””

On the other side of the country, Los Angeles–area real estate agent Scott Pinkerton says his clients who can afford to stay put are doing just that.

“A lot have gotten frustrated by losing out to all-cash offers, investors, and being outbid,” says Pinkerton, of Century 21 Peak. Some who could have afforded a single-family home are realizing they may be able to afford only a condo now or they may need to move to a cheaper location if they want to buy. “What they want is no longer available in their price range.”

But others are just waiting for the right opportunity.

“I’ve got clients sitting on the fence who reach out to me every so often, checking to see what the market is and what they can get for their money,” he says. “Some people are sitting around waiting for a shift in the market.”

Not everyone can wait until the market cools further and more homes come online. Many of Dallas-based associate broker Debbie Murray‘s clients are out-of-towners who got jobs in the area and need places to live (whether they’re going into the office one day a week or five). The Dallas region, in particular, has become a hot spot for big companies (such as Toyota) relocating their headquarters or expanding operations in the area.

One couple from Chicago whom Murray worked with put in 11 offers before one was finally accepted. They recently closed on a $1.1 million home they bought sight unseen for roughly $100,000 over the list price with no contingencies.

“If you’re moving here from out of state, you have no choice,” says Murray, who’s with Allie Beth Allman & Associates.

Taking a break can price some buyers out

Taking an emotional health break from an active home search can be a financial risk. While bidding wars may die down a bit, potentially saving buyers some big money, prices and mortgage rates are still rising.

“Unfortunately in our market, prices just keep increasing, and in some cases for a buyer who waits too long, can price them out of the neighborhood they desire the most,” says Brad Pauly, a real estate broker at Pauly Presley Realty in Austin, TX. “I do tell them that I understand what they’re going through, but to try and push through and wait for the next week of properties to hit the market.”

During the COVID-19 pandemic, Austin emerged as one of the nation’s hottest markets. Median home list prices surged more than 46% in the metropolitan area from March 2020, when the pandemic upended life in the U.S., through August 2021, according to the most recent Realtor.com data. (Metros include the main city and surrounding suburbs, towns, and smaller cities.)

He’s seeing homes sell for 40% over the list price as out-of-towners from the coast have moved in and are bidding up prices.

“You’ve got to be the crazy buyer to win. You have to be the one who’s willing to pay well over market value to buy the house you really want,” Pauly says.

Even those who can afford the higher price tags aren’t finding the home they want with so few properties for sale.

“It’s kind of like the whole world is against them. They’re throwing their hands up. They’re defeated,” says real estate agent Greg Nino, of Re/Max Compass in Houston.

The Kerns, who were trying to find a forever home in the Indianapolis suburbs, certainly had enough—at least for now.

“We’re going to stop looking for a while,” says Ron Kern. “Right now the entire market is so out of whack. … You don’t have time to think through all the things that need to be thought through.

“We’re really fortunate that we don’t have to move. We’ve got a nice house. We can stay here for a while,” he says. “But at some point it would be nice to move toward something that’s more fitting for people our age.”